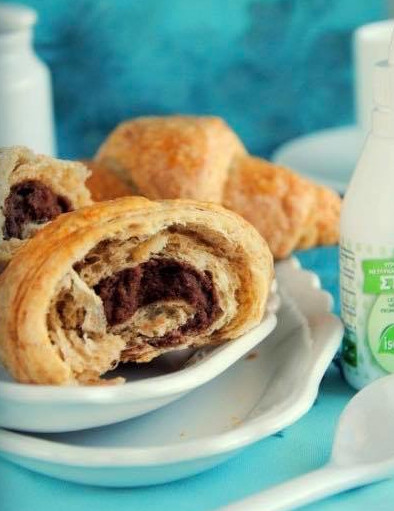 (for croissants of about 850g)

Put all the ingredients for the dough into the bread maker, except for 130g of butter, which you will work on later. Do this by adding all the liquid ingredients first and then the solids. Choose the pasta making function. If you do not have a bread maker, you can use a dough making mixer or else you will have to knead it by hand.
When the dough is ready, divide it into two halves. By using a rolling pin and some flour, open pastry sheets of ½ a centimeter. Now you will need the butter. Since the butter is at room temperature, it will be easy to spread it on the two pastry sheets with a knife. Spread half the butter on one sheet and the rest on the other. Fold the sheets in half and then fold once again. Place them in a food bag and freeze for 15 minutes.

Until they freeze, prepare the homemade chocolate filling.
Start with the hazelnuts. Put them in an anti-stick frying pan and heat at low temperature mixing often. When heated and their natural oils begin to surface, put them into the food processor and pulse them. They must become a thick paste. Now add the rest of the ingredients for the chocolate filling and beat well. The filling is ready.
After 15 minutes of freezing the pastry sheets, take them out of the freezer and use a rolling pin and some flour to open them again. In this way, the butter remains in the folds. After opening them to a width of ½ a centimeter, double fold them as before and place them in the food bag and in the freezer for a further 15 minutes. Do this procedure twice.

This procedure is necessary for the dough to be fully buttered so when baked, it will have a unique texture, found only in croissants.

After the procedure is done three times, give them a croissant form. Open each pastry sheet with a rolling pin and some flour. It must be ½ a centimeter wide and rectangular. Cut the pastry sheet in even triangles. At the base of each triangle, add the chocolate filling with a teaspoon. Start rolling the pastry triangle with the filling inside. Put each rolled triangle on a baking tray, which has a baking sheet on it. Continue with the rest, using the same procedure. When placing them on the baking sheet, be cautious to leave space between them, since they will triple their size when baked. When finished allow to sit at room temperature, so they may rise. When they have tripled their size, wash them carefully with the beaten egg, using a pastry brush. Bake in a preheated oven at 160°C for 20 minutes, using the fan function.

Inspire and create the most delicious homemade sweets
& jams … with no calories!
MORE RECIPES
Share

Subscribe to our Newsletter to stay informed and send you our new recipes.