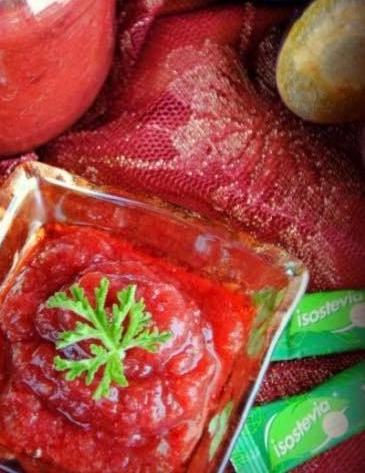 Wash the plums and cut them in half. Remove the pits and place the plum halves into the pot. Add water and let them simmer on low heat. Cover with a lid and allow to soften until the peels come off easily. When ready, remove from heat and let them cool. Then carefully peel them.

Put the fruit flesh in a blender. Add the juice that has remained in the pot. Beat with a hand mixer until they become a pulp, not much though, you don’t want it to be too juicy.

Afterwards, put the plum pulp into the pot again. Add the isostevia ® sweetener, the apple geranium leaves and the agar agar powder. Turn on the heat and mix. Once it starts boiling, mix again and allow to boil for 5 minutes. The jam is ready.

Remove the apple geranium leaves. Put the jam in sterilized jars, hot as it is. Close the lids and turn them upside down until cool, so as to create a vacuum seal. When cooled, the jam will thicken due to the agar agar powder.

If placed in the fridge, it will be preserved for 15 days, as long as the jars remain sealed. Or else, it must consumed within 4-5 days, after the jar is opened. If you wish, you may freeze fresh plums after you have washed them and have removed the pits. You must put them in a pot without defrosting them and follow the same instructions.

Inspire and create the most delicious homemade sweets
& jams … with no calories!
MORE RECIPES
Share

Subscribe to our Newsletter to stay informed and send you our new recipes.